Takhat Sachkhand Shri Hazur Abchalnagar Sahib is the main Gurudwara of Nanded and is one of the five High seats of Authority of the sikhs. This is the place where Shri GuruGobind Singhji breathed his last.The Gurudwara is situated in Nanded Town. The Gurudwara was built by Maharaja Ranjit Singhji, The great Ruler of Punjab between 1830 to 1839 A.D. Inside the Gurudwara, which contains the mortal remains of the 10th Guru, there are exhibited a number of weapons of various kinds. 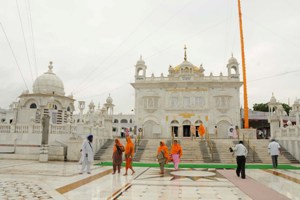 A pilgrim Centre of great significance. It is considered to be one of the Shaktipith of Maharashtra. The temple of Goddess Renuka Devi is situated on a hillock abounding in natural beauty at a distance of about 2.415 km. from the village of Mahur. The temple is said to have been constructed by a Yadava king of Devgiri about eight ot nine hundred years ago. On the day of Dasara every year a very big fair is held in honour of Renukadevi. 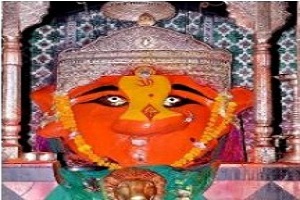 The Sayyad Saidodin alias Haji Saiyya Saravar Magadum Dargah known as the Haiji Saiyya Magadum Dargah constucted about 750 years ago (in 736 Hijri) is situated to the south east of the town. An urus is held at the Dargah for three days from 16 Rajjab. 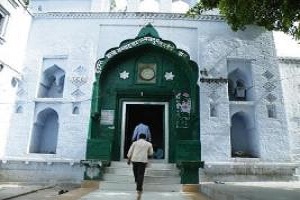 The Masjid known as the Hazrat Nawab Sarfaraz Khan Sahid Masjid is said to have been constructed about 330 years back. Sarfaraz Khan was an officer in the army of Aurangzeb. The Masjid is constructed in stone. There are four minarets on the southern side which collapsed when it was hit by a lightening in 1960. The one on the north has eight chains. Below the chains is a figure in the shape of a bell. To the north-west corner of the masjid is a barrow (a well square in shape). The Masjid is situated in Biloli Town. 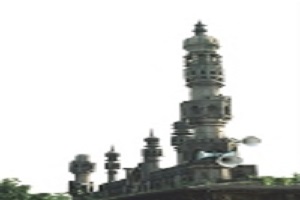 Malegaon is situated in Loha Taluka. The village is famous for a very big fair held in honour of Lord Khandoba. This big fair namely “ Malegaon Yatra ” is held in Margashirshvadya 14 (Dec/Jan). Malegaon is situated at a distance of about 57 km from Nanded. The fair is famous for its animal market. At the time of the Fair horses, asses, camels etc. are brought in large numbers. Thousands of people visit the Fair. 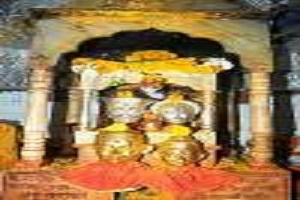 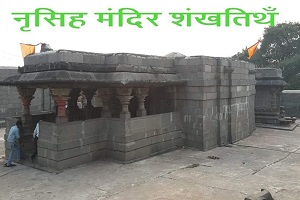 Kandhar Town is famous for its fort. Kandhar fort is situated in the heart of Town. Encircling the fort, is a ditch filled with water. It’s construction is attributed to the Rashtrakuta King Krishna III of Malkhed who styled himself as Kandharpuradhi Swar. Outside the Kandhar fort at some distance is a hillock on which is situated an old Idgah held in reverence by the muslims. It is of Nizamshahi period with two domes in characteristic Ahmednagar style. 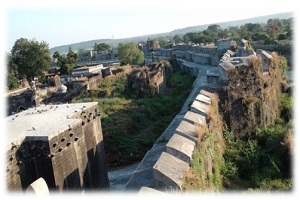 Hottal is situated in Degloor Taluka. There is a very beautiful Temple Lord Siddheshwar, which is known for the characteristic Art of The Chalukya Era. Hottal is 8 k m away from Degloor. The temple is built in stone. 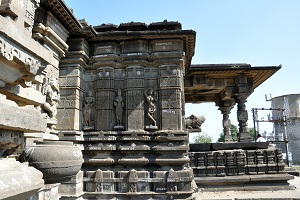 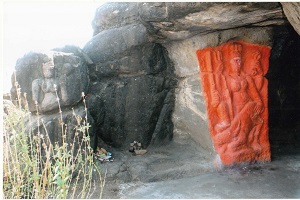 This waterfall on the Banganga River is an unbelievable site. It flows round the year, as river Banganga makes from four to five places only to meet the Holy Godavari River. The Rock Pattern is equally interesting, as the black rock appears like a metal and as if wet. In reality the wetness is due to the shine it adores. The southwest part is picturesque site. 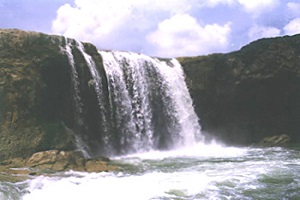 Unkeshwar is famous for the temple dedicated to God Siva and the hot springs located close by the temple. These springs are said to possess medicinal value and cure skin diseases. The temparature of water in one tank stands at 42.20 C and is found to contain sulphur in water springs. The excess water flows out from the Gomukh. Many bubbles are seen in the tank which indicates sulphur contents as per the experts. 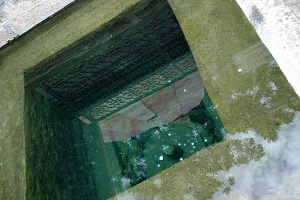 Constructed on the river Godavari, this is one of the largest lift irrigation projects in Asia. The project is situated near Asarjan village, at about 8 k.m. from Nanded city. The project was completed in the year 1988. The back water covers 40 k.m. length of the river Godavari. Culturable Command Area of project is 23222 Hec. and Irrigable Command Area is 19514 Hec. Up till now irrigation Potential of 15856 Hec. is created. The command area of this project is distributed in Nanded, Kandhar & Loha taluka of Nanded district. Live storage of project is 80.79 Million cubic meters Out of which 43.95 Million cubic meters storage is reserved for drinking purpose for Nanded city and 10.26 Million cubic meters storage is reserved for Industrial purpose. The barrage has 18 vertical gates. The idea of this project was put forward and pursued by former Chief Minister of Maharashtra late Shri. Shankarrao Chavan. Hence in his remembrance the Govt. of Maharashtra has named the water reservoir as the Shankar Sagar Jalashaya. With the huge water reservoir, presence of Kaleshwar temple, Landscaping, the Ghat and the Ratneshwari hills in the surrounding the place has been attracting pilgrims and tourists. Every year on the day of Mahashivratri lacks of pilgrims assemble for the Yatra. This is one of largest lift irrigation project in Asia sub-continent located on Godavari river. This project is named as Dr. Shankarrao Chavan Vishnupuri Project.

Narsi village is in Hingoli District and is birth place of saint shree Namdev. The saint was born in 1270 and his full name was Namdev Damaji Relekar. Every year a fair is arranged in memory of the saint. The State Government has declared Narsi as holy and tourist place. The Government has constructed a tourist home at Narsi. There are many followers of saint Namdev from Punjab and rest of India who frequently visits Narsi. Sikh followers are constructing a Gurudwara at Narsi and also they have decided to construct a memorial of saint Namdev. 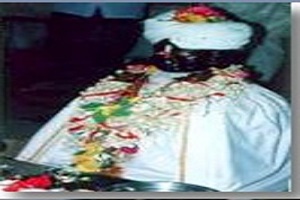 The twelve jyotirlingas are the most significant places of pilgrimage for Hindus in India. Five of them happen to be in Maharashtra. Shiva has been worshipped in these places for centuries. Aundha-Nagnath is one of them. Anudha Nagnath is in the Hingoli District.This is adjoining District of Nanded. This pilgrim center is of great significance, since it is considered to be the Eighth (adya), of the 12 jyotirlingas. It is believed that Dharmraj (eldest of Pandav) has constructed this beautiful temple while they were expelled for 14 years from Hastinapur.The temple of Nagnath has exquisite carvings. The temple is of Hemadpanthi architecture and is situated in about 60,000 sq. ft area. Large number of pilgrims visit this temple on shivratri and Vijayadashmi. 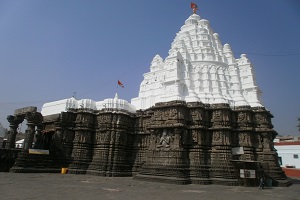 The twelve jyotirlingas are the most significant places of pilgrimage for Hindus in India. Five of them happen to be in Maharashtra. Shiva has been worshipped in these places for centuries. Parli Vaijanath is one of them. Parli Vaijanath is in the Beed District.This is adjoining District of Nanded. This place is a very sacred place and has historical importance. Queen Ahilyabai Holkar reconstructed it in stone. Grand entrance of temple attracts attention of visitors. In the vicinity of the temple there are three Kundas and Shani temple which attracts the pilgrims. 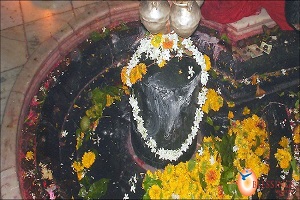 Bidar is a District place in Karnataka State. The Gurudwara, is one of Holiest Place for Sikhs. Every Year this place attracts lots of tourists from all parts of the country particularly during the months of November and March. Legend has it that Saint Guru Nanak visited the palce while the land was in the grip of a famine The Guru performed a miracle at the request of the locals and a spring of water from the laterite rock mountain burst out. Till this day crystal clear water flows from the laterite trap.The belief is that drinking this water cures many ailments. 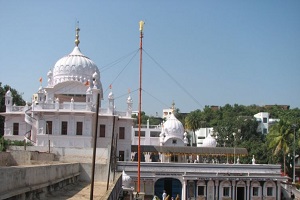 बासर
Basar is a village with wonderful gardens surrounded by the temple premises amidst the dry and barren patches of the north Telangana region.The Saraswati temple at Basara is one of the two famous Saraswati temples in India. It is approximately 117 K.M by road from Nanded towards Hydrabad,It is also connected by train root from Nanded to secundrabad. Sri Gnana Saraswathi temple at Basara on the banks of river Godavari is the only temple in South India dedicated to the Goddess of learning. Local legend suggest that Maharshi Veda Vyasa, the author of Mahabharata, came to the forests of Dandakaryana to meditate. He began meditating on the banks of the River Godavari and found the place to be very peaceful. The divine mother is believed to have appeared before the sage and ordained him to build temples for the Shakti trio: Maha Saraswati, Maha Lakshmi and Maha Kali. The sage Veda Vyasa did so by bringing three handfuls of sand and sculpts out the figures. This place was initially named after Vyasa and was called “Vyasapuri”. Later on it got took names Vasara and ultimately Basara/Basar due to the influence of the Marathi language in the region.Due to the presence of Saraswati, Lakshmi and Kali, Basara is considered as the abode of the divine trinity on the Bank of the River Godavari. 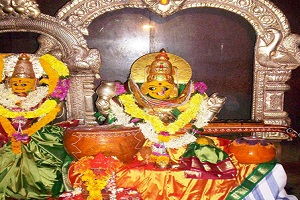